July 24, 2014
Dear Friend of the Campaign for Peace and Democracy,

CPD has joined with a growing list of organizations planning a national day of action for Thursday, July 24, calling for an end to the assault on Gaza and for lifting the Gaza blockade. We hope you can participate in this critical protest, which is outlined below. We would also ask that you make every effort to find ways to urge the Obama administration and Congress to end all U.S. support for Israel, whether it be military, economic, diplomatic or political.

There will be events around the country. The New York City demonstration convened by Adalah-NY and supported by many other organizations including the Campaign for Peace and Democracy, will start at 5pm on Thursday at Foley Square in Manhattan, and will be followed by a march. Details are on Facebook. 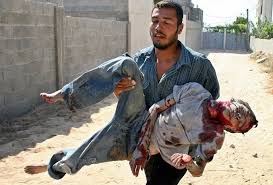 URGENT CALL FOR A NATIONAL DAY OF ACTION
THURSDAY, JULY 24
END THE ASSAULT ON GAZA AND LIFT THE BLOCKADE

Please join us this Thursday, July 24, in this urgent call to stop the Israeli offensive in Gaza and end the 7-year siege that has made life in Gaza so miserable. In this latest round of violence, over 500 Palestinians have been killed and thousands are injured. Seventy-two percent of those are civilians, including over 80 children. One hundred thousand are displaced and living in makeshift shelters; electricity has been reduced to four hours a day for 80% of the population; water has been cut off to hundreds of thousands; sewage is flowing into the sea; hospitals have been bombed and there are shortages of everything from food to medicines. We must act now!

We encourage you, both organizations and individuals, to hold actions and events in your communities this Thursday, July 24. We are grateful for all the actions that have taken place and that will continue, but doing something together on one day can help demonstrate the breadth of our movement and concern. Whether you can get out a crowd or just a few people, please do something!

Here are some possibilities:

As you act Thursday, think how you can begin or expand a campaign in your community's institutions to boycott and/or divest from corporations profiting from and/or complicit in Israel’s war and occupation. Consider boycotting Sabra and Sodastream products. Many US corporations are directly involved in the recent conflict, including Caterpillar, Boeing, HP, Northrop Grumman, Lockheed Martin, General Dynamics, GE, and Raytheon. Please check to determine if your school, church, work place, and other community institutions may be invested in them.

Have your organization endorse the National Day of Action here: http://tinyurl.com/mrwr2gc

Add your Thursday local action to the list here:  http://tinyurl.com/n3kdqd8

Post your photos, videos, and reports from actions here: http://theworldstandswithpalestine.tumblr.com/