JOIN THE GLOBAL PROTEST!
INTERNATIONAL DAY
AGAINST RACISM AND FASCISM

On March 22nd we protest with thousands of people around the world in Greece, Britain, France, Spain, Poland, Denmark, Belgium, Austria, Cyprus, Australia and elsewhere, against the rise of fascism and racism, state authoritarianism and police violence. The initiative was launched in Greece, where the neo-fascist threat posed by Golden Dawn is well known. Please join us! 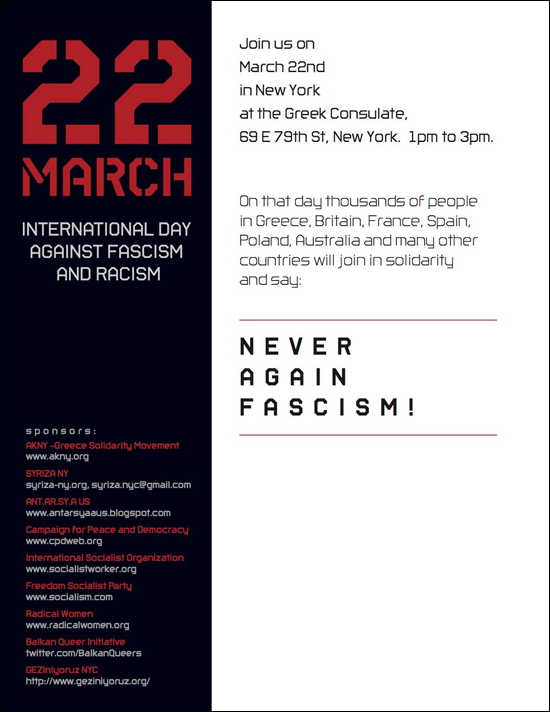 Striking posters from Greece and several other countries for the March 22nd event are below.

USEFUL BACKGROUND: On March 12, the Campaign for Peace and Democracy co-sponsored a forum "Is Fascism Returning to Europe?" It was an excellent meeting, with informative and stimulating presentations by Benedetta Argentieri, Eylem Delikanli, James Robertson, Costas Panayotakis, Jonah Birch, and Matt Dobson, followed by lively discussion from the floor. Panelists spoke about Greece, France, Russia, Scotland, Turkey, and Ukraine; the event was chaired and introduced by Iannis Delatolas. Check out the video here.