Nicholas Kristof challenges defenders of the Afghan war in his 10/24 OpEd "What About Afghan Women?," noting that many Afghan women fear that as the war goes on, fundamentalist values and laws will grow stronger whether or not the Taliban wins. These fears are well-grounded, given the corrupt and misogynist nature of the Karzai government and its key warlord supporters.

Karzai's government gives lip service to women's rights to propitiate international public opinion, but fails to protect women from horrific oppression in areas not controlled by the Taliban. In fact, the government's corruption and incompetence, combined with foreign occupation and U.S. attacks on civilians, serve to strengthen the Taliban.

Kristof concludes, "So let's not fool ourselves by thinking that we're doing favors for Afghan women by investing American blood and treasure in an unsustainable war here." He's right. But in contrast to Kristof's advocacy of a U.S.-Taliban peace deal, former Afghan parliamentarian Malalai Joya has argued that the solution lies in the independent struggles of Afghan women and men themselves against the Taliban, Karzai, his warlords, and the U.S. military presence. As Americans, our greatest contribution to those struggles is to press our government to end its disastrous military intervention, and to offer grassroots solidarity to the democratic movements in Afghanistan crippled by this endless war.

CPD's 2009 statement on the U.S. wars in Afghanistan and Pakistan is available at https://cpdweb.org/stmts/1014/stmt.shtml. Nicholas Kristof's article appears at the end of this message.

* * * * *
Former Afghan Parliamentarian Malalai Joya Writes in The Guardian (Great Britain) of Her Opposition to NATO Occupation, the Taliban, Karzai, and Fundamentalist Warlords 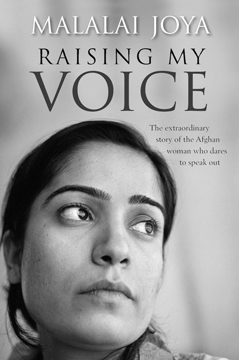 One year ago Hamid Karzai was declared re-elected as president of Afghanistan, ending an election that had no legitimacy in the eyes of ordinary Afghans. The presidential election last year was a fraud, with ballot stuffing, vote buying and massive corruption reported by the world's media. Even if the independent election commission had not cancelled the planned run-off between Karzai and his main challenger, Abdullah Abdullah, it would have represented only a choice of the "same donkey with a new saddle". People had no incentive to participate as they knew that both main candidates would bring nothing positive for Afghan people.

Karzai had lost his popularity way before the 2009 election. This was due to the ever increasing corruption of the government, the never-ending crimes of the many fundamentalists and warlords in his regime, and the financial scandals and corruption of his brothers. In Kandahar people even started calling Ahmed Wali Karzai the "little Bush", after the hated US president.

The vast majority of Afghans have lost all hope in Karzai. For us his words and actions have no value, and that includes his latest "peace negotiations" and other measures. Including killers like Mullah Omar and Gulbuddin Hekmatyar in the government is not about negotiating for peace, but completing the decades-old circle of warlordism and fundamentalism.

It's important to say that these so-called elections haven't damaged Afghanistan as much as the US and its Nato allies have, with their bombing and occupation. Wikileaks has exposed some of the truth about the civilian toll of this war against the Afghan and Iraqi peoples. Afghans hold the US and Nato, and their puppet Karzai, responsible for these war crimes. They claim to fight terrorism, but in fact they are the biggest terrorists in the eyes of our people because of their crimes and brutalities.

Unfortunately the Afghan people are not yet strong enough to drive out the US, overthrow the mafia government of Karzai and bring an end to the crimes of the Taliban and other fundamentalists. Our history proves that this resistance to occupation will continue until we have won our freedom. Until both the US and the fundamentalists of both the Northern Alliance and Taliban brands are driven out of power in Afghanistan, we cannot see a bright future. It is now more than five years since I was elected to the Afghan parliament. My experience of this "democratic process" was to see my microphone cut off, and to be threatened with death by other MPs many of whom teamed up to remove me illegally from my seat. My case alone is enough to prove that women's rights in Afghanistan have not truly been safeguarded our situation was just invoked to justify the war.

In fact, it's important to remember another document that Wikileaks exposed earlier this year: a CIA paper assessing western public opinion on the war that recommended using "testimonials by Afghan women" expressing fear about a Taliban takeover in the event of Nato pulling out. A Time cover story featuring the disfigured Bibi Aisha was a clear example of using the plight of women as war propaganda. The headline "What happens if we leave Afghanistan" could have, or should have, been "What happens while we are in Afghanistan", because crimes of mutilation, rape and murder against women are commonplace today.

Many warlords and commanders aligned with Nato and Karzai carry out their sexist, misogynist crimes with impunity. Time could, for example, have done a cover story condemning the law signed by Karzai in 2009 that legalised crimes against Shia women, or about the shocking levels of women committing suicide by self-immolation.

We had another so-called parliamentary election in September, but I chose not to run. Any hope I had for using the ballot box to achieve change in Afghanistan is gone. Like last year's presidential vote, September's election was full of the buying and selling of votes one province, Paktika, reported a turnout of 626%. This sort of thing is the reason elections in Afghanistan long ago became a bad joke.
Tomorrow there is an election in the US, and it is now two years since Barack Obama was elected president. His surge of troops has brought only a surge of violence, and his expansion of the war into Pakistan has claimed many innocent lives. Obama promised "hope" and "change", but Afghans have seen only change for the worse. Here he is now seen as a "second Bush".

The only change that can make us hopeful about the future is the strengthening and expansion of a national anti-fundamentalist and democracy-loving movement. Such a movement can be built only by Afghans. And while we want the world's support and solidarity, we neither need nor want Nato's occupying forces.

What About Afghan Women?

For those of us who favor a sharp reduction in American troops in Afghanistan and a peace deal with the Taliban, the most vexing question is: What about Afghan women?

Time magazine framed the issue in a wrenching way with a cover this summer of Aisha, an 18-year-old woman who ran away from an abusive husband. The article said that last year the Taliban had punished Aisha by having her nose and ears hacked off — a traditional punishment for women considered disobedient or promiscuous. Her husband did the cutting.

Time quoted Aisha as saying of the Taliban, as she was touching her disfigured face: "How can we reconcile with them?"

It's a fair question, as is: Are those of us who favor a military pullback in Afghanistan sentencing more women to be brutalized? Those are questions that I came to Afghanistan to wrestle with.

Women are fearful, no question. Here in Kabul, far fewer women wear the burqa today than on my previous visits. But several women told me that they were keeping burqas at home — just in case. The gnawing fear is that even if the Taliban do not regain control in Kabul, fundamentalist values and laws will gain ground.

Still, it seems to me a historic mistake to justify our huge military presence in Afghanistan as a bulwark to protect the women. In fact, most women I interviewed favored making a deal with the Taliban — simply because it would bring peace. For them, the Taliban regime was awful, but a perpetual war may be worse.

Take Pari Gol, a woman from Helmand Province whom I met here in Kabul. She despises the Taliban and told me on this trip that back in 2001, "I prayed that the Taliban would be defeated, and God listened to my prayers."

Yet in the fighting since then, she said, her home was destroyed and her husband and daughter were both killed by American airstrikes. She is now living in a mud hut here — fuming at the Taliban, the Americans and the Afghan government. "I hate all of them," she told me.

Remember also that while women in Kabul benefit from new freedoms, that is not true of an Afghan woman in a village in the South. For such women there, life before 2001 was oppressive — and so is life today.

One man from Helmand Province, Wali Khan, told me that there would be no difference for women in his village, whether the Taliban rule or not, because in either case women would be locked up in the home. He approvingly cited an expression in Pashto that translates to: "a wife should be in the home — or in the grave."

In other words, oppression is rooted not only in the Taliban but also in the culture. The severing of a woman's nose and ears occurs not only in Taliban areas but also in secure parts of Pakistan. Indeed, I've come across such disfigurement more in Punjab, the most powerful and populous province of Pakistan, than in Afghanistan — yet I haven't heard anybody say we should occupy Pakistan to transform it.

The best way to end oppression isn't firepower but rather education and economic empowerment, for men and women alike, in ways that don't create a backlash. As I wrote in my last column, schooling is possible even in Taliban-controlled areas, as long as implementation is undertaken in close consultation with elders and doesn't involve Westerners on the ground.

Often the best place to hold girls' literacy classes is in the mosque. And the insistence of Western donors that they get credit with signs on projects they finance is counterproductive. Buildings might as well have signs reading "burn me down."

One impressive force for change is BPeace, which encourages female entrepreneurs in Afghanistan. Soora Stoda, one of the entrepreneurs I met, is building a potato chip factory. Another, Shahla Akbari, makes shoes. Her mother, Fatima Akbari, has 3,000 (mostly female) employees around Afghanistan, working in jam-making, furniture building, tailoring, knitting, jewelry and other lines.

Fatima Akbari is now expanding her women's businesses and literacy classes in Taliban-controlled areas, always working closely with mullahs and elders to gain their support and protection. "When you go and win their hearts, you can do anything," she said.

"I'm not threatened by negotiations with the Taliban," she added. "In fact, it would be good for the Taliban to be involved in the country, to see that there's nothing wrong with women leaving the house. And once there's a deal with the Taliban, security will be better."

So let's not fool ourselves by thinking that we're doing favors for Afghan women by investing American blood and treasure in an unsustainable war here. The road to emancipate Afghan women will be arduous, but it runs through schools and economic development — and, yes, a peace deal with the Taliban, if that's possible.