Below is an article from the UK Guardian describing an urgent action to save the life of Bahraini human rights activist Abdulhadi al-Khawaja, who is now on the 67th day of a hunger strike protesting his detention and treatment in prison. Please add your name TODAY to a letter being delivered to the Bahrain Embassy in London at close of business Tuesday, April 10. Anyone wishing to add a signature can do so by sending an email to: releasealkhawaja@gmail.com

Also, if you are in the New York City area, the Middle East Institute at Columbia University, American Council for Freedom in Bahrain and the newly-formed Bahrain Solidarity Campaign NYC are sponsoring a meeting "Deported from Bahrain: An Eyewitness Account of the Gulf Kingdom's Ongoing Revolution" on Monday, April 16th, 7:30pm - 9:00pm with Radhika Radhika. Sainath is a civil rights attorney who was arrested and deported from Bahrain in February 2012. We will meet at 501 Northwest Corner Building, Columbia University, 550 West 120th Street (on Broadway) in Manhattan. Co-sponsors (in formation) include Witness Bahrain, Campaign for Peace & Democracy, Global Justice Working Group at Occupy Wall Street, Defend Egyptian Revolution. Please join us if you can.

Abdulhadi al-Khawaja's death would be a stain on Bahrain 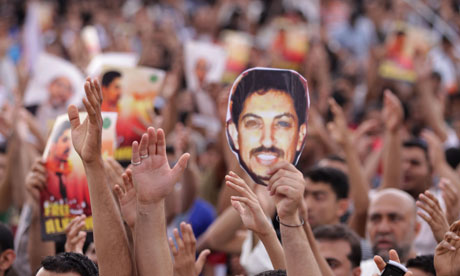 We, the undersigned, call on the government of Bahrain to immediately and unconditionally release leading human rights activist Abdulhadi al-Khawaja, whose life is now in grave danger as he enters the 61st day of his hunger strike, begun in protest at his detention and treatment.

We call for his urgent release on humanitarian grounds, and in conformity to the findings and recommendations of the Bahrain Independent Commission of Inquiry (BICI).

If Abdulhadi al-Khawaja is not released and dies in prison, the Bahrain government will signal a total failure of political will in addressing the human rights violations that occurred in 2011. This would further alienate the already fragile trust of opposition groups and instigate a dangerous collapse of civil society. Mr al-Khawaja is deeply revered and respected by much of the population of Bahrain, as well as the wider region and world. His death could dangerously inflame national tensions which are already escalating.

Mr al-Khawaja was arrested on 8 April 2011 and subjected to cruel and abusive treatment by government employees. A forensic team working for the BICI team investigated his case.

The BICI team found that his jaw was broken "immediately after the arrest" which required "major surgery" to heal. In hospital he was "blindfolded the whole time and handcuffed to the bed with tight cuffs". He was discharged from hospital, against the recommendations of his doctor, and placed in "solitary confinement in a small cell" where "there was no fresh air". He experienced "regular beatings at night", sexual assault and other torture.

Mr Al-Khawaja was tried before a military tribunal and given a life sentence for allegedly conspiring to overthrow the Bahrain government. Both his trial and subsequent appeal, which was also heard before a military tribunal, have been heavily criticised by major human rights and legal organisations. The BICI further found that after he was sentenced, he was "beaten by guards". The findings of the BICI report were also very critical of the quality of the justice Mr al-Khawaja and other political leaders received.

Al-Khawaja has now been on hunger strike for 61 days. The consequent deterioration of his health means that he will likely be dead or comatose before that date.

Mr al-Khawaja began his hunger strike on 8 February 2012. He has stated that he will continue this strike until "freedom or death". There is no question of his commitment to this stance.

If your government allows Mr al-Khawaja to die in prison, it will send a stark message that it means to ignore the most important recommendations of the BICI report. The message will spread not just across Bahrain, but internationally, to citizens and governments who have relied upon your assurances that you are committed to reform.

You have the power to release Mr al-Khawaja. It will be a stain on Bahrain if his death comes before his freedom.

In the interests of justice and reconciliation in your country, we urgently and respectfully ask you to release Mr al-Khawaja immediately and unconditionally,

• This letter will be delivered to the Bahrain Embassy in London at close of business Tuesday. Anyone wishing to add a signature can do so by sending an email to: releasealkhawaja@gmail.com.