September 17, 2013
Dear Friends of the Campaign for Peace and Democracy,

Not that you'd know it from following the U.S. press, but major strike actions are taking place in Greece this week. The striking teachers have appealed urgently for support. Two groups in the U.S. have launched a sign-on statement of solidarity with Greek teachers and other public employees, and CPD urges those who agree with the statement to add their names to the change.org petition below by going here: 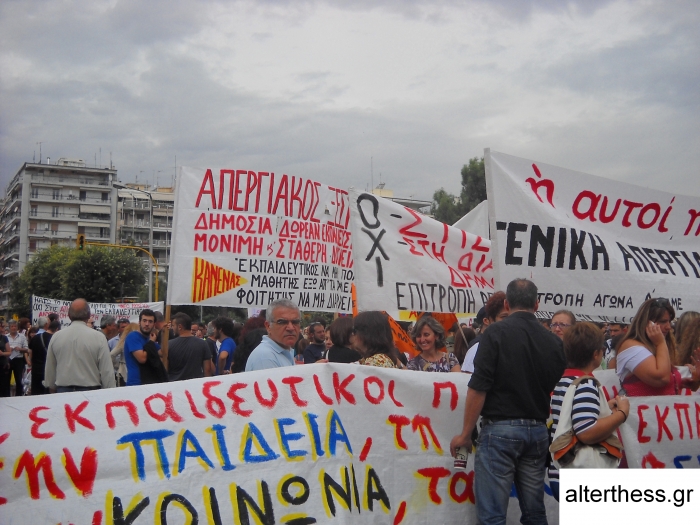 Teachers here in the United States face a similar assault, with teacher layoffs, school closings, and relentless testing of students which serves to justify attacks on teachers rather than actually supporting and improving education.

In addition, we stand in solidarity with the many other public employees in Greece who are also going on strike to resist brutal government-imposed austerity measures, including staff at the social insurance funds, the state employment agency and labor ministry, and hospital workers.

The situation in public schools in Greece is dramatic. The "Troika" (the European Commission, the International Monetary Fund, and the European Central Bank) and the cooperating Greek government of Samaras (New Democracy) and Venizelos (PASOK), using the economic crisis as a pretext, and without any communication with the interested parties, have taken a series of harsh measures such as

These measures aim at privatizing part of vocational education, introducing apprenticeship as a form of minor/under-age employment replacing education process and at establishing a harsh, examination-centered system in all forms/grades of upper secondary education, forcing students to seek private tuition outside school and leading to school dropouts.

We support the striking teachers in Greece and demand that public education not be sacrificed to comply with the wishes of the "Troika." The Greek teachers and the Greek people do not stand alone in this struggle. This struggle is not just for public education but also for workers dignity, civil rights and liberty and true democracy itself here in the United States and around the world.

To add your name now, please go to www.change.org/petitions/support-striking-greek-teachers

NOTE: OLME intends to create a Solidarity Fund to support teachers in strike.