During the past two years, the Campaign for Peace and Democracy has released official statements in broad support of the Syrian revolution: CPD Salutes Syria's Courageous Democratic Movement and Message of Condolence and Solidarity from U.S. Peace Activists to the Syrian People. What follows, however, is not an official position but rather a personal statement by CPD's co-directors about the current situation. We hope it will generate an on-line symposium with arguments opposing, supporting, or supplementing our view. Please contact us at cpd@igc.org if you are interested in participating in this symposium.

We also invite symposium contributions and comments on an important issue that the statement below attempts to address, and that is the question of outside arms to the rebels. Many have argued that if the rebels, even the more non-sectarian and democratic-minded elements among them, get weapons and ammunition from outside, it will have one or both of the following bad consequences: 1) it will only perpetuate the bloodshed, and/or 2) it will greatly increase the influence of foreign powers that are actually hostile to the democratic struggle in Syria, and will thus inevitably pervert the struggle. Others maintain that the democratic rebels have a right to acquire weapons from anywhere they can, as long as they are able to maintain their independence, and indeed must obtain these arms if they are to both avoid defeat and successfully compete with theocratic forces.

We look forward to hearing from you and to reading your comments and responses.

STATEMENT ON SYRIA
By Thomas Harrrison and Joanne Landy
June 2013

More than two years ago, the Syrian people, inspired by the Arab Spring, began a democratic revolution against the viciously authoritarian Assad regime, a revolution that we enthusiastically supported from its beginning and continue to support.

For two long years now, we, like the rest of the world, have watched in horror as the Syrian government waged merciless war on its own people. Some of the revolutionaries argued that for strategic if not for pacifist reasons, the movement should have remained nonviolent despite the mounting repression it faced. However, the extreme violence and unspeakable cruelty, including the use of torture on a massive scale, that Assad unleashed against an initially peaceful democratic movement impelled many of the regime's opponents to take up arms, understandably believing that they had no choice other than outright surrender, which would be followed inevitably by mass slaughter. Some of the rebels have also committed atrocities; these are indefensible, but it should be remembered that it is the Assad regime that has been the initiator and far and away the greatest perpetrator of violent outrages. 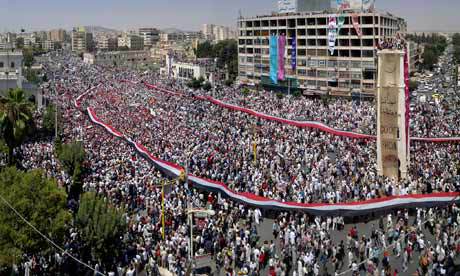 Assad's brutal effort to stay in power has led to more than 90,000 deaths and the displacement of some four million Syrians, almost 20 percent of the country's population. The Syrian people have every right to depose him and his cohorts, and to hold them accountable for their crimes. While at this writing the strategy of the Obama administration remains unclear, it has signaled possible military intervention but is more likely to press for a "negotiated solution" that allows Assad or his regime’s military and security forces to remain in power. We would welcome an end to the violence in Syria, but we strongly oppose any diplomatic, not to mention military, intervention by outside powers that tries to dictate the shape of a future Syria or prevents the Syrian people from overthrowing the Assad regime. It is the Syrian people themselves who must make the decision as to how to defend themselves and their basic human rights, and what kind of society they hope to build. We stand in solidarity with their struggle and our hearts go out to them in their suffering.

The fate of Syria must not be decided by foreign powers or forces, all with their own self-interested agendas. We condemn the support given to Assad by Russia, Iran, China and Hezbollah. Equally, we condemn the attempts by Saudi Arabia, Qatar and the other Gulf states to manipulate the Syrian revolution by promoting reactionary Islamist forces within its ranks. As for our own government and its allies, Washington, London, Paris and Tel Aviv are long-time enemies of democracy in the region; they cannot be trusted to help shape a free and socially just Syria. In particular, we condemn the recent Israeli bombing of Syrian targets.

Consistent with our strong opposition to any kind of military intervention in Syria by the U.S., or other foreign powers, we also oppose providing air cover or establishing no fly zones. We do believe, however, that the democratic opponents of the Assad dictatorship have the right to get guns where they can, while resisting all attempts by those who provide arms to acquire political and military influence in return.

At the same time, we are troubled by the growing strength of anti-democratic elements within the Syrian rebel forces. It is clear that extremist Islamist militias, armed and financed by Saudi Arabia and Qatar and including foreign jihadists, are expanding. Increasing numbers of fighters are rallying to Jabhat Al-Nusra, a fundamentalist group with ties to Al-Qaeda. The Syrian revolution was rapidly militarized not only because of the savagery of Assad’s response, but also because it originated in the countryside; peasants and villagers could not readily confront the regime with strikes and other nonviolent mass actions. Once militarization began, leadership came to depend on access to guns rather than on political programs. This helps explain the growing power of heavily armed and tactically skilled Salafi jihadists.

But if extremist Islamism is now a leading force in the Syrian revolution, it is not the only force. There is a great deal of evidence that the mass of ordinary Syrians, while mostly Sunni and devout, are nevertheless non-sectarian and democratic-minded, and that they are willing to challenge the Islamist militias. Anand Gopal, one of the few international journalists to actually go to liberated towns and cities in Syria, has noted that in some cases, when self-appointed Islamist authorities have attempted to repress women and political opponents, they have been met by effective resistance.

Even if it is far from inevitable, it is possible that extremist Islamists may yet hijack the Syrian revolution and deflect its democratic potential. It would be a tragedy for the Syrian people if they ended up exchanging the rule of a brutal tyrant for a regime of bigoted fanatics committed to the oppression of women and gays under a theocracy. We are also concerned that the revolution’s democratic promise may be compromised by the oppression of Syria’s many ethnic and religious minorities under a post-Assad government. The largest of these minorities, the Kurds, have a long history of mistreatment, and their national rights should be respected as should the rights of Alawites, Christians, Druze and other minority religions.

It seems clear, though, that millions of Syrians want neither Assad nor theocratic tyranny. The Syrian revolution continues, and the nature of a post-Assad Syria, should it come to be, is far from clear. But international solidarity can crucially help to influence the outcome. Global public opinion — and especially the left, social justice and human rights movements, and labor — must work both to support the revolution and to strengthen democratic and secular-minded forces within its ranks.

We stand for full democracy, an independent labor movement, and complete equality for women, sexual minorities, religions and ethnic groups everywhere. We will do everything we can to support Syrian groups and individuals who share this democratic vision, and we call on people throughout the world to do the same.