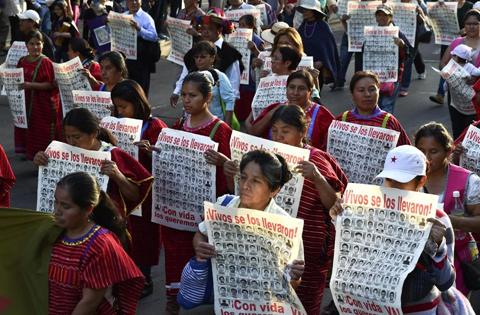 U.S.-BASED CAMPAIGN FOR PEACE AND DEMOCRACY
ISSUES STRONG STATEMENT OF SUPPORT FOR STUDENTS AND PROTESTERS IN MEXICO

The statement and signer list has been forwarded to Mexican protesters and to President Enrique Peña Nieto and Federal Attorney General Jesús Murillo Karam; to U.S. President Barack Obama and Secretary of State John Kerry; and in Canada, to Prime Minister Stephen Harper and Minister of Foreign Affairs John Baird.

The statement is available on the Campaign for Peace and Democracy website in English, Spanish, and Farsi, along with a full list of signers and their identifications. It expresses solidarity with the bereaved but courageous parents of the dead and disappeared students of Ayotzinapa and with the millions of Mexican students and citizens demanding justice and a different Mexico, a Mexico of peace, democracy, social well-being and justice. It condemns not only the Mexican government, but also governments and corporations in the United States and Canada, saying:

The depth of the Mexican crisis, the state and drug cartel violence, and the perception that the electoral route is closed because of widespread fraud, manipulation and corruption, means that Mexican popular movements have to work in the middle of a boiling cauldron of repression and violence. The United States is deeply involved in this cauldron through military agreements with the Mexican armed forces in carrying out this repression in Mexico under the cover of the drug war. And Canadian mining companies are also deeply involved as they seize and despoil the waters and lands of Mexican peasants and carry out brutal repression through private armies aided by various levels of the Mexican government against many Mexican communities…

The statement concludes with an affirmation of support for the Mexican protesters’ demand for an independent international inquiry into not only the disappearance of the 43 students but also into the thousands of disappearances, killings and human rights abuses that have been carried out under the umbrella of the drug war. It calls on the United States to end its facilitation of these horrific abuses through the military aid provided in the Mérida Plan and military training, and on the Mexican government to stop the systematic human rights violations being carried out to protect Canadian and U.S. companies.

The statement was translated into Farsi by Havaar: Iranian Initiative against War, Sanctions and State Repression, a grassroots group of Iranians, Iranian-Americans and allies who oppose military action and the U.S.-led sanctions against Iran, and oppose state repression inside Iran. In releasing the statement, Havaar said,

Founded in 1982, the Campaign for Peace and Democracy advocates a new, progressive and non-militaristic U.S. foreign policy -- one that encourages democratization, justice and social change. The Campaign sees movements for peace, social justice and democratic rights, taken together, as the embryo of an alternative to great power politics and to the domination of society by privileged elites. A current example in the United States is the mass movement against police brutality and the racist criminal justice system that has emerged in response to the grand jury decisions in Ferguson and Staten Island.